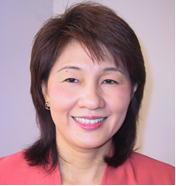 Ong Lay Hong was born in Singapore and has spent more than 35 years working in the Television Industry. She received her Bachelors in Telecommunications (Radio and TV Production) with a Certificate in Film Studies from Indiana University, USA. She started off as a camera woman in an America TV Station then joined Hong Kong Rediffusion Television News as a News producer. She joined Singapore Broadcasting Corporation (now MediaCorp) in 1982 and rose from the rank and file to become Chief Editor of Chinese News and Current Affairs on 2000 onwards. Since June 2007, she has been designated to lead the China team in developing the China market for Channel NewsAsia.
Her work as the Producer for documentary films ‘Ode to a Humming Bird’ and ‘A Day is Too Long’ received 1989 Asia Pacific Broadcasting Union Television Prize and 1981 Prix Futura in Berlin; recognition and accreditation from members of the International Film Industry. Since 2000, Lay Hong has been invited to be the juror of the International Emmy Award. She was part of the jury panel of the final round for the categories of News and Breaking News in the International Emmy Award held in Doha, Qatar in 2006. Besides working in the media, she was awarded scholarship to study media in United Kingdom in 1991 and at the University of California, Berkeley in 2004. As a Visiting Scholar in UC Berkeley, Lay Hong devoted her academic studies in the field of New Media.